Last year, Nintendo turned down an offer from Activision’s Skylanders to have them exclusively for the Wii. Skylanders are little figurines that interact with a video game to let you play as that particular character in the game. They are incredibly popular, bringing in $1.5 billion in revenue since 2011. Did Nintendo mess up? Maybe. But then they thought, “we’ll just make our own.” And that’s why we have Amiibos.

Amiibos work a little differently than Skylanders. Depending on the character, you can use them differently for different games. One way to use Mario here, is to link him up on Super Smash Bros. Wii U and train him to be stronger than your average fighter. You can buy these things for about $13 if you can find them. Or if you can’t, you can buy them on eBay for over $100. Some characters are easy to find, some are extremely rare. This is just one of the Nintendo products with artificial scarcity.

/r/amiibo is a great place to watch the insanity. It’s also a really great place to find what you’re looking for. People will post sitings at sorts and links to order or preorder certain figures. They’ll also vent their frustrations about how they can’t find what they want. What sense does this make? Why doesn’t Nintendo just make a ton of them and sell them all? /u/Majordomo_ makes a good point:

“Here’s the thing; by limiting production they actually are pulling in a larger demographic of consumers. In the short-term they are sacrificing sales to increase the long-term demand through engaging a pool of people that would have otherwise not cared about Amiibo.

Also, with limited shelf space at retailers (The profit margin is slim on a 13$ Toy) it is in the manufacturers best interest to have stock come in waves and be turned immediately. Which is exactly what is happening. Perceived demand when seeing empty shelves vs stocked shelves greatly effects consumer behavior.”

Nintendo knows exactly how this works. They have created the illusion of value. They make people do stupid things. I have a friend with every single one of the Amiibos sitting on his living room floor all still in the boxes. He has preordered all of them and stood in line to receive them. I guess that’s what happiness looks like: 30 or so Amiibos on your floor in boxes.

No one cared about the new 3DS XL…until Nintendo sold the one with the mask. 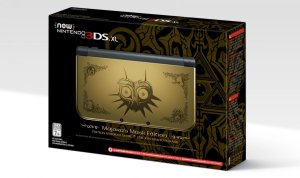 Any Zelda fan that has a true love for the franchise would want to have this. It looks beautiful! And the new 3DS XL solves a lot of the problems associated with the 3D mode that was hard to tolerate for more than five minutes. Chris Kohler at WIRED.com got to play the graphically enhanced Majora’s Mask, originally released for the Nintendo 64 in 2000, on the new 3DS XL.

“My first experience with New 3DS made it clear that it had at least solved the illusion-breaking issue, but I also found that the weird eye fatigue was gone. I could play and play and play in 3-D and totally forget I was doing it,” Kohler said.

Playing Ocarina of Time on 3DS was great, but I never played it with the 3D mode on. I anticipated keeping it off for Majora’s Mask until I read what the new hardware can do. Okay I know! I have a 3DS XL currently. I’ll pre-order the new 3DS XL Majora’s Mask special edition, along with the game. Then when I go to pick it up, I’ll trade in my current device to take a chunk out of the cost! Perfect plan!

Doing a quick search on the product led to some alarming revelations. They’ve been completely sold out…for a long time. The system sells for $199.99. If you really, really want one, you can get on eBay. There are hundreds, literally hundreds selling between $300 and $500. Thomas Whitehead at nintendolife.com explains what is happening best:

“Products designed – by their very concept of being special editions – for dedicated fans are snapped up by many with no interest in them, all in the name of charging those that are desperate. Nintendo gets its cut of the retail sales, but these private sales are a Wild West and are all about exploiting fans for personal gain.”

I’ve been through this hunt before with Nintendo a few times now. It reminds me of the time I searched for the Super Smash Bros. Wii U bunduru complete with Gamecube controller and adapter. It made something I thought should be an extremely simple purchase into something infuriating. I am at least thankful that I have absolutely no interest in Nintendo’s Amiibo figures, designed to used with games like Super Smash Bros. Wii U.

This frustration of artificial scarcity all falls back on Nintendo. Yes, making fewer copies of a product will increase the value, but this only hurts the people who truly love Nintendo and want the products. Carlton McHard is a hardcore Nintendo fan who wants to see some change in how they operate.

“That is the terrible reality of this situation, Nintendo. There are fans out there that have followed you for years. There are some like me who have known you our entire lives. We’re dedicated customers and we want to buy your merchandise. I only wish that you would make it available to us and not punish regular consumers for the sake of your brand. The hype generated around scarcity only creates dissonance between you and loyal fans.”

But who knows how Nintendo will respond? What can we do as loyal fans and consumers? Regardless of how badly you want a product, like the Majora’s Mask 3DS, never buy it for more than the retail price. Also, be at peace with not having the product. Make compromises. Maybe I don’t need the Majora’s Mask 3DS. Maybe I’ll just get a regular new 3DS and find whatever Zelda decorations to put on it.

For now, enjoy the things you already have. Go plug in your  Super Nintendo or Nintendo 64. Play some Mario. It’ll make you feel better.