Steam is a place where PC gamers can buy and download games. They can also build a friends list and play many of those games online with those people. The library of games is so huge, you could spend many lifetimes getting through all of it. I like to think it is the Netflix of video games (Sorry GameFly).

Kyle Orland came out with this mega-post about the most popular games on Steam in 2014. The data is fascinating. I don’t want to pull too much from it, but the one thing that stuck out to me (which Kyle did not touch on) was Civilization: Beyond Earth. It’s a turn-based strategy game that takes place in the distant future when humanity is looking to settle new planets. Other Civilization games start off at the beginning of mankind. You pick a civilization and build it from the ground up, from inventing the wheel to nuclear weapons. Civ: BE took things in a little bit of a different direction. This is the chart that blew my mind: 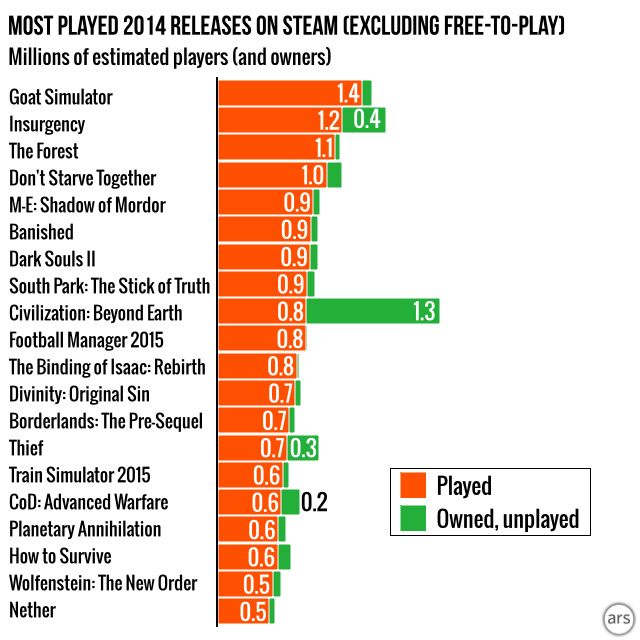 What jumps out to you on this chart? You’re telling me that 2.1 million people bought Civilization: Beyond Earth and over half of those people didn’t play it? 1.3 million people spent $50 each on this game and have not played it. Kyle, my friend, how could you not pick up on this and run with it? Don’t worry, Reddit is on it. On the subreddit /r/civ, which encompasses all Civilization games, Civ players discussed why they just don’t play Civilization: Beyond Earth all that much.

“I got 53 hours out of BE and I felt I had done everything the game had to offer. I have 1200 hours in Civ V and there is still so much more fun to be had. I don’t even think I’ll bother buying the BE DLC unless it drastically changes the game.” – /u/Chuck_Morris_CE

Um, sir, that is a lot of hours to put into one game. (That’s exactly 50 days of gameplay for those keeping score at home.)

“Unlike Civ V, Beyond Earth lacks personality. Leaders are boring, Civs are almost all the same. Made up tech feels forced and quotes we all love civ series for are cringeworthy at best. UI also looks unpolished and ugly. BE isn’t bad game, it’s just bad Civilization game. I played it for 15 hours and have no desire to come back as for now. For comparison, I spent 230 hours with Civ V and It’s still one of most played games in my library.” – /u/Boland

Interesting, anecdotal, but interesting. And the top comment with over 1,100 upvotes?

Okay I think that settles it. It’s not that Civ: BE is a bad game. It’s a very different take on what makes Civ fun. Instead of a tech tree where you have to discover technology in a particular order, there is a tech web that allows you to go through it haphazardly. That’s one thing that turned a lot of players off according the the rest of the discussion. What is very clear is that people love Civilization V that hard. Like, 1,200 hours hard.

I’ve been playing Civ since Civilization II and I can say that I’ve loved every one of them up until Civ: BE. According to Steam, I’ve played 302 hours of Civ V, making it by far the most played game in my library. And Civ: BE? Seven hours. Like a lot of Civ fanatics, I was really pumped for Beyond Earth. After winning a Space Victory in other Civ games and watching your completed space colony launch to Alpha Centauri, I would always wonder what was next for my civilization. I really hope it was never what I found in Civilization: Beyond Earth.